Getting ready for The Party!

In my typical fashion I'm getting a little crazed as I get ready for Kiel's birthday party.

I spent most of today making his birthday cake. It's probably three times the size it really needs to be. But, I don't know how to do things small. I probably have three times the food needed for the party too.

I actually bought a lot of ready made food (which is unusual for me, but I'm trying not to go crazy - hah), and we're getting a sandwich tray from Ben and Irv's (a Jewish deli). My original plan was to just have snacks and cake since the party is at 2pm, but Rich felt it was important to have sandwiches. There will also be a variety of cheeses, a vegi tray, fruit salad, a variety of chips and dips, and some hot appetizers. Normally I'd have a couple bottles of wine and beer as well, but Rich's family really doesn't drink. That's not going to stop me from making a pitcher of beer margaritas for myself though! If everyone comes there should be about 20 people; all from Rich's family. You know, since my parents aren't coming to their youngest grandchild's first birthday party. But I'm not bitter...

Here's a sneak peek of the cake. 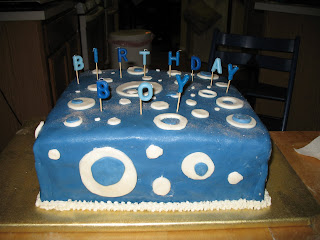 I tried a new fondant recipe. Usually I make marshmallow fondant, but this one supposedly tastes more like a butter cream. It does taste good but wasn't as easy to work with as MMF. We'll see how it holds up and what everyone thinks of the taste.

I made a smash cake for Kiel too, but I forgot to take pictures of it.