So I have DeQuarvains tendinitis. It hurts like a bitch. Wiping my own ass is excruciating.

This morning my hand doc injected me with steroids. He assured me it was safe for the baby. Damn I hope this works.

Email ThisBlogThis!Share to TwitterShare to FacebookShare to Pinterest
Labels: hands

Hey Toasty, where did your blog go?
Posted by Kristine on Tuesday, June 19, 2007 No comments:

It's surprising to me how many people have said recently something to the effect of "well you know, they say that after you adopt it just happens." And most of these people knew that we did IVF!

My usual response is "well, no, actually I think it might have something to do with the three IVF's, the several hundred shots in my butt, and the $40K we spent."

Also, I think if it was just adoption that allowed us to get pregnant, it wouldn't have taken us another four years to get here.

These commenter's were all well meaning people, so I wasn't too harsh on them. I know they didn't mean to say something totally stupid.
Posted by Kristine on Monday, June 11, 2007 1 comment: 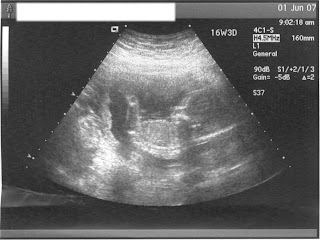 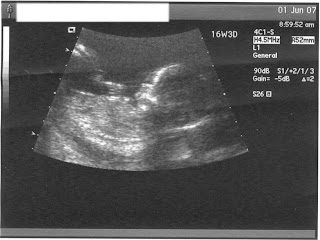 As we sail through week 18 all continues to go well. Ultrasound pictures from week 17 above.
OB appointment last week was non-eventful. I actually lost four pounds since last month. My blood pressure was 110 / 70 and my cervix is tight and closed.
Another ultrasound this week to check my cervix. I think it's just an internal and won't include any real baby pictures. Level II ultrasound in two more weeks. Hopefully confirmation of the sex then. At last weeks ultrasound the tech said she thought it "might" be a boy, but not to tell anyone yet.
Yes, I'm a tiny bit disappointed. Mostly because for the last few weeks I've been thinking it is a girl and starting to look at girly stuff. The last girl born in my family or in Awesome Daddy's was me, so both sides have fingers crossed for a girl.
Obviously though, we will all be thrilled with a boy!
Posted by Kristine on Monday, June 11, 2007 1 comment:

Teacher: TB, you don't seem to have your listening ears on, please put them on.

TB: I can't, they are flying around the room and I can't catch them.
Posted by Kristine on Monday, June 11, 2007 No comments:

Email ThisBlogThis!Share to TwitterShare to FacebookShare to Pinterest
Labels: He said what?, the boy
Newer Posts Older Posts Home
Subscribe to: Posts (Atom)