He needs Peoples in his bed, people!

We finally finished cleaning out Kiel’s bedroom (thanks Bella!) and he is just thrilled! I’m trying not to feel too guilty that it took so long, considering his excitement level. Even Noah was impressed and I’ve had to explain more than a few times why the room can’t be his and why it IS fair that Kiel gets it. (This is what Noah’s bedroom looked like when he was three. Someday I should do a blog post about what it looks like five plus years and a few dozen rages later. It isn’t pretty.)

Kiel was very excited to go to bed in his own bedroom the first night.  We never really expected him to sleep in it all night, but were shocked when he made it until about 4am before he crawled in bed with us.

Since then he has rarely made it past midnight, but he still starts out in his own room, which I think is huge progress!

Although happy to read stories and snuggle in his bed, he doesn’t actually want to sleep in it by himself. I have rarely been successful leaving the room before he is asleep. If he does fall asleep he does it with at least one hand holding on to my arm, which makes it very hard to get out of bed without him waking up. We tend to do better on the weekends when he is more tired because he doesn’t get a nap.

Most nights though, even if he does fall asleep, he ends up begging one of us to get in bed with him. He needs Peoples in his bed, he tells us.

Despite watching that English nanny do it on that TV show, I don’t have it in me by that time of night to keep taking him back to his room. I’m tired and I need some time to do my own work, and the only time I have is after the boys are in bed.

So, we have come to a compromise.

If Kiel will not sleep in his bed alone before Rich and I are ready for bed, he also can not come down to the family room. Therefore, the stalemate position is the staircase. He can’t get off the stairs, but we aren’t going to force him to his bedroom and make all of us miserable.

So this is how he ends up more nights than not. 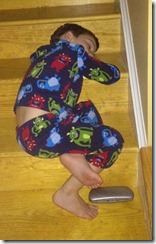 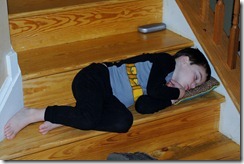