Sometimes a picture does say it all! 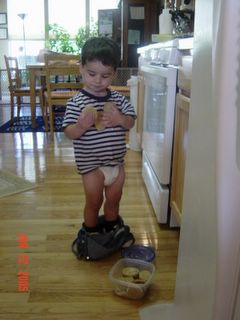 Caught with his pants down AND his hands in the cookie jar!

Email ThisBlogThis!Share to TwitterShare to FacebookShare to Pinterest
Labels: pictures, the boy

Today is Amazing Daddy's first day back to work since his hernia surgery. Thank you LORD! Although it was nice having him home more, especially since he made dinner most nights, he was starting to drive me crazy! The Boy and I have our routines on my days off during the week and AD was in the way. I love him SO MUCH, but sometimes I feel like I have two kids, instead of one and a husband.

Case #1: Monday I called home to check in before I left work and AD told me he had really hurt his back, that he could barely move, and he wasn't sure he could drive to pick TB up. I asked him what he did, thinking perhaps he got motivated and decided to clean the garage. He tells me he doesn't know what he did, he was just sitting at the computer and when he got up he was in agony. I did feel a little bit sorry for him, although after watching him walk around hunched over because he said his balls were swollen from the surgery, it was starting to get a little old...seeing him look so old (yikes...major flashes of what is to come considering I married a man 11 years older than me).

I started thinking on my way home that I should be nicer to him, and take better care of him. But then I also started thinking that just "sitting at the computer" didn't really make sense to me considering the amount of agony he was in. Then it hit me...48 year old man, home alone for extended period of time, high-speed internet access, wife perhaps not as interested as she was pre-child...oh yeah, you got it. Guess those balls weren't as sore as he made them out to be...

Oh yeah, hard to feel sorry for that one.

Case 2: Oh yes, he did try, my mother keeps reminding me of that. Darling husband decided to clean out the closet/room that we keep the litter boxes in. It's probably been a year since he's taken everything out and scrubbed the floor, so it was definitely in need. He asked me to do him a favor and move the boxes back in, since his back hurt. Sure, of course I'll do that, and thanks so much for cleaning it I say.

But then, I look in the closet, and see a good inch of WET litter, along the perimeter of the room. Very wet litter, urine soaked wet litter, that is seeping under the walls and finding it's way under my almost new laminate floor in the room next door. The floor that I spent two weeks putting down, smashed my thumb almost flat on, and learned new curse words over. Also, what I am most proud of on our basement remodel.

It's not like we don't have two vacuum cleaners less than ten steps away!!

I took a deep breath and then yelled for AD. All I could say when he walked in was "look at this...just look at this, what where you thinking??". His response? "ohhh...uhhhh...I guess I wasn't." I couldn't even talk to him for the rest of the night.

You see? All of a sudden he's ten years old and I'm his Mommy! That's just so wrong!!!
Posted by Kristine on Wednesday, August 24, 2005 No comments:

Email ThisBlogThis!Share to TwitterShare to FacebookShare to Pinterest
Labels: not so amazing daddy

On Laurie Berkners "Under a Shady Tree" CD there is a song called Do the Dragon. Oh..haven't heard of Laurie Berkner? No, I don't imagine you would if you don't have kids under the age of 5.

Anyway...Do the Dragon is one of my faves of the CD. Mostly because I like the UHHH part of the "1...2...3...4...UHHHH...here we go" line. Apparently the dragon likes me too, because he has taken up residence in my esophagus. And he's gotta fire in his mouth.

I'm actually semi-miserable. Enough so that I called and made a doctor appointment for myself. I tend not to make appointments for myself for a couple reasons. One, I spend so much time taking The Boy to all his appointments I can't fathom another minute in a waiting room. Two, I have to take time off work to do it if I want to be seen without TB throwing a temper tantrum in the middle of my discussion with the doctor. But mostly...because then I might have to actually have a conversation about my weight problem and issues with exercise (as in...I don't like to do it).
Posted by Kristine on Wednesday, August 17, 2005 No comments:

Email ThisBlogThis!Share to TwitterShare to FacebookShare to Pinterest
Labels: stuff

Great literature down the toilet

I started a great book this weekend, The Rule of Four. I haven't been able to put it down. This means I read it ever opportunity, which makes the bathroom a prime spot. Thinking I had a few minutes to do my business in private and get another chapter in while The Boy was playing with Daddy, I retired to the powder room. Wouldn't you know my little monster can smell out shit from 2 miles away. (Now if you ask him what it smells like he'll say gummies...but that's a story for another day.) So midway through my business here he is talking about flushing the toilet, and mommy pooping, and then turning the water on and off in the sink. So much for my enjoyable crap.

So I put the book down, clean myself up, and reach for the faucet to turn it off while pulling up my drawers. Of course TB has to check out my offering to the porcelain gods, and then flush so he can watch it go down. Thinking he's occupied for the 5 seconds it takes to wash my hands I take my eyes off him. Damn if that little shit didn't decide my book needed to take a swim.
I thought we were past the putting things down the toilet stage. Do they ever get past that fascination? I know Amazing Daddy never got over the fascination of what he can put in it.

It's so enjoyable reading a book when you have to peel the pages from each other to turn them.
Posted by Kristine on Monday, August 15, 2005 1 comment:

Email ThisBlogThis!Share to TwitterShare to FacebookShare to Pinterest
Labels: He did what?, the boy

I'll admit it, one of the reasons I started this blog was so I could swear. It's not that I don't swear at all in "real life," but now that The Boy is starting to repeat what I say in "appropriate" context I need to get a better handle on it.

At least I'm not the only one. Amazing Daddy has his moments too. A couple months ago AD and TB were having a rough morning together, and after TB dumped over a large glass of water (we don't need to mention that it was one I had left on the coffee table the night before, do we?) AD had a little tantrum of his own and slammed his hand down while saying "god damn it!!!" Next thing I heard was TB hitting his play tool bench yelling "god damn it." Thank goodness I was still in bed and could finish laughing before I went down stairs to see if I could help. Fortunately, that phrase didn't seem to stick.

A few weeks ago we heard TB saying "oh jesus, oh jesus" over and over. I think you can blame that one on me. What makes this even more funny, is that TB and AD are Jewish. Hearing a little Jewish boy say "oh jesus" cracks me up! AD says it's not swearing...so there you go. Again, that phrase didn't seem to stick either.

But...I've apparently made an impression with "oh shit." Last night AD and TB were playing with Lego's and TB'S fell apart on him and he said "oh shit." Perfect context! Now if my boy isn't brilliant I don't know whose is! Time to call MomMom and Papa!
Posted by Kristine on Monday, August 15, 2005 No comments:

Last weekend we took The Boy to a new park. Amazing Daddy tried to show him how to run the bases on the baseball field. TB was far more interested in the goose poop along the way. It went something like this.

Email ThisBlogThis!Share to TwitterShare to FacebookShare to Pinterest
Labels: amazing daddy, He did what?, poop and farts, the boy

Picking up The boy

Today I had to leave work early to pick The Boy up from daycare. I had to pick him up earlier than usual because he has started expressing some agression (e.g., beating up) the other parents as they come to pick up their kids. I figured if I get their early enough I could sneak him out before any other parents see me.

To increase todays humiliation factor I couldn't get my car started when I was leaving work. I had the right key, I knew it was my car (no one elses car in the parking lot has petrified "fluffies" in the back seat), the key even fit, but the damn thing wouldn't turn. So I went back in side and let everyone laugh at me as the "men" told me to turn the steering wheel. Hasn't this ever happened to you before?? Well, duh, yeah...but I always managed to fix it without knowing what I did. Fine, I'm a dork...with a capital D.

The Boy will be 2 1/2 tomorrow. Not only is it his half birthday, it is also his 2nd "Gotcha Day." We adopted TB 2 years ago from Russia. Tomorrow is also the two-year anniversary of my grandmothers passing. A bitter sweet day.
Posted by Kristine on Wednesday, August 10, 2005 No comments: