Our son, the traffic Gestapo

TB has always done well with his colors. So it was no surprise to Amazing Daddy and myself that he would start translating this knowledge to understanding what red, yellow and green meant on a traffic signal. What we didn't expect was the transformation of TB into the "Traffic Gestapo."

It started out small, as it often does; first, a comment when Daddy turned right on red. Now, tell me, how do you explain the right on red rule to a 3 year old? He seems to have accepted it as a fact, although it took several weeks of squealing "No Daddy (or mommy as the case may be), No, it's red" from the back seat. Now Mommy doesn't do well with loud, expected shrieks frback seatackseat. And the incessant "but why Mommy, why" doesn't help. Imagine my surprise though, when my response of "because Noah, that's the way it is, you just have to accept it" seemed to work.

But the traffic light observations didn't stop there.

Now let me clarify, I'm a fairly law abiding driver; it's always been my opinion that if I don't follow the rules, and I get caught, I deserve the ticket. I'll brag a bit though, because to this day, at the age of 38, I have never actually received a traffic ticket! Of course, I won't be surprised when I get one on my way home tonight. My "lawfulness" tends to annoy my husband at times, especially when I tell him to slow down. It also appears to annoy him (or perhaps drive him f-ing nuts) when I tell him what color the light is. For someone who likes to push the yellow, he's awfully slow to start on the green. I used to joke and say I couldn't wait until TB could take over my job of telling Daddy what color the light is.

So, imagine my reaction, when the other day I was taking TB to preschool and I was stopped at a red light where I needed to make a left turn. The oncoming traffic gets the green first, due to a left turn signal on that side. I don't typically have a problem making that turn at that time of the morning, but I'm always aware of the line of cars behind me which can get rather long. Apparently I was a bit distracted, because there were no oncoming cars and before I got the green I started to turn anyway. TB SHRIEKED at me "MOMMY, NO, it's RED, DON'T GO!" It stopped me in time and I thanked him and told him he did a great job. And he said..."Mommy, that was a BIG THUMBS DOWN!"

Well he told me!

Then a couple days later Amazing Daddy pushed a yellow light when he was making a left turn, and the light turned red as he was going through. Don't even think that TB let that one pass. "Daddy, NO. RED LIGHT. That's a BIG THUMBS DOWN!"
Posted by Kristine on Thursday, May 25, 2006 1 comment:

The fight for Mothers day

So which Mom is supposed to get mothers day?

In my husbands family we have his mom, his SIL, his nephew's wife, and me.

MIL has had over 60 Mothers days of her own.

This is our nephews wife's first Mother's day, so in my mind she has first priority. I'm curious how it went for her since she had both her MIL (pushy Jewish mom, BTW) and her own mother to contend with.

And of course, me. This is my third Mothers day. And the sixth year I've had the joy of spending it with my own MIL.

So really, whose day is it?

It wasn't exactly mine, since I had to spend it with the MIL.

Some how his brother's family disappeared for the day. Amazing Daddy invited them over for dinner, but they never responded. Typical in their rudeness. But that's a topic for another day.
Posted by Kristine on Monday, May 15, 2006 No comments:

Email ThisBlogThis!Share to TwitterShare to FacebookShare to Pinterest
Labels: inlaws

Yeah, I admit it. I'm an American Idol junky.

Last night, with full confidence I told Sparklyhusband that Chris would be the big winner, and I thought Tayler would be second.

So imagine my surprise when Chris was voted off tonight? Huh? WTF? How did that happen?
Posted by Kristine on Wednesday, May 10, 2006 No comments:

Before you accuse me of animal cruelty, I didn't do it. I had no intention of doing it. And I asked them not to do it. But, they did it anyway. 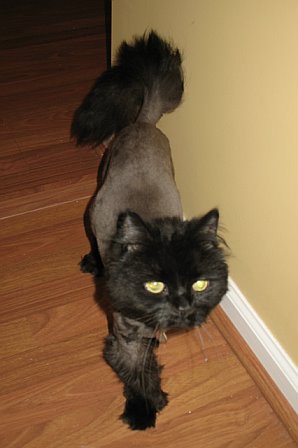 The Puss in Boots cut

I'm sure it will grow back in a few months. But will it take that long for the other cats to recognize him again? I left them with strict warnings this morning not to tease him, but I forgot to turn on the nanny cam, so I guess I'll never know.


Went out to lunch with one of my coworkers today. Gorged on chips and salsa. Yummmm!

Back in the office with chocolate cake in hand, another coworker comes up behind me and asks if I know that there is a tear in the back of my jeans. Imagining a small hole I say, "why no, I didn't, thank you" as I reach my hand instinctively to my rear. Well low and behold, I don't just have a tear, I have a fucking rip that extends from my waist band down below the pocket on my right side, and my right purple underwear clad cheek, is sticking out for all to see. I'm surprised it wasn't waving a flag.

How this happened you ask? I have no earthly idea. I can't imagine that I didn't notice. Or that no one else did. Although that makes me think that others did, but chose not to tell me. Because of course, everyone enjoys a look at my purple pantied ass. I mean, my goodness, its spectacular in its large, flatness. Thank god for packing tape. Perhaps I can start a new fashion trend.