What is green in your life? Feel free to tell me about it in the comments. :)

Playing in the Rain

My good friend Laurie reminded me recently how important it is to give our children memories of having fun. It really opened my eyes and mind when I heard that. Because of past behaviors and difficulties we have had in public, I hesitate to put us out there in public unless I know I can control both boys, and make a hasty exit if needed.

I'm trying to get us out there more and build those memories.

Today Kiel and I had one. We took Sera to the vet and when we left there it was raining. Kiel wanted to go to the playground.

So we went and Kiel was in hog heaven.

He showed me how much faster the slides are when it is raining. And how if he ran really fast with his mouth open he could get a drink. And how walking the balance board lends itself to jumping off right into a mud puddle.

He ran around in circles with a huge smile on his face. It was awesome!

We were both thoroughly wet by the time we left. Wet and Happy!

I wish I had my camera with me. Oh well, I will just have to remember it with words.

Email ThisBlogThis!Share to TwitterShare to FacebookShare to Pinterest
Labels: baby brother, having fun

Some light at the end of the tunnel.

Well, it looks like I completely missed the month of June. I do hate when I go so long without blogging.

I'm not sure where to start as so much has happened in the last couple months. Lots of it is good stuff though, which is, well, good. One perplexing incident that I do want to share, but it may have to wait until the next time I have a chance to sit down and write.

Rich is feeling better after all his medical issues in March. We see the cardiac surgeon next week to get a final answer on if he needs open heart surgery or if they can fix the ASD (hole in his heart) via a catheter procedure. He plans on getting a second opinion at Penn or Jeff before any final decisions are made.

I have almost stopped overreacting every time he groans or makes another unexpected noise, and I no longer wake him up to make sure he is breathing if I don't hear him snoring. The whole thing scared the shit out of me, and I know it scared Rich too.

Noah made it through third grade. The awesomeness we were seeing in May has tapered off a bit. I knew it would, especially since it was mostly due to a medication change. Still, he has made some great improvements since this time last year.

We fought his IEP this year. I can't remember if I wrote about that before, but I don't think I did. It was not fun. We are hoping to get some new testing done this summer and be able to use those results to support the need for a more appropriate program for him. I have a feeling we are going to be in for quite a fight and will probably need a lawyer to help us. Do lawyers take credit cards?

He is at the same camp as last year and is loving it. It is an amazing camp and I feel good sending him off in the morning. This year they started a new program that is almost entirely inclusion with the "typical" side of the camp. There is dedicated social skills work every day and then an aid that supports the kids doing the inclusion. Noah has a smile on his face every day when he comes home. Even better he comes home regulated and in control of himself. If only he could get that amount of physical activity at school.

Kiel is still my sunshine, but I have to say we have seen intermittent thunderstorms the last several months. He can be one stubborn kid! He still won't sleep by himself and Rich and I still don't have the energy to fight it. More often than not he ends up in sleeping in a sleeping bag at the foot of the steps until one of us goes to bed. I know he's feeling the stress of living in this family. We are all feeling the stress of living in this family. I'm trying to decide if I need to start taking him to see someone or if he is still too young. I don't want to jump the gun on it, but I don't want to miss anything either. This parenting thing is hard y'all!

We have a new addition to our family in the form of a little furry ball of sweetness. Her "official" name is Lady Seroquel the Feliness, but we call her Sera. 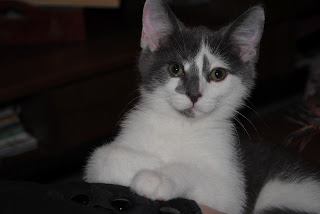 She is an absolute sweetheart and I can't help but smile when I see her or think of her. The piece of my heart that has been empty since Ambien died three years ago is filling up again. 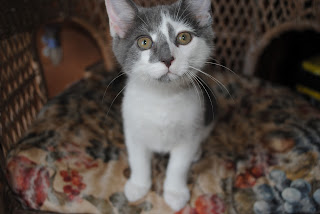 It took Thor about three days to accept her, which is pretty fast. I know he has been lonely without Stel. It's good to see him running around like a crazy cat playing again. He got rather tubby the last few months. His 14 pounds of cat flesh look very big next to Sera's 3 pounds of kitten daintiness. 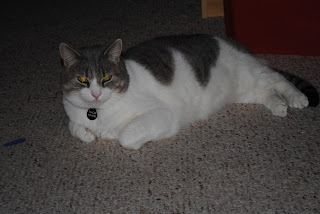 My good news is that I cut back a couple hours a week at work so I only need to go in to the office three days. Officially it is only three hours less a week, and I pretty much have to get the same amount of work done as before. That's OK though, as having an extra day at home is huge in relieving some of my every day stress. My plan is to have Kiel home with me on Fridays so I can spend more time with him. I realized I only have one more year until he starts kindergarten and then I can't just keep him home when I want, so I better do it now.

I'm working on getting Noah set up for an evaluation at the fetal alcohol clinic at one of the children's hospitals by us. I didn't realize until this spring that they had a program for FASD there. Noah will see a team of doctors and have a bunch of tests done. I'm just waiting right now for the coordinator to get the appointment set up. It's a bit tricky with all the people he will see to coordinate it. I will write more about that soon!

Well, Noah just finished up with his reading tutor (OMG, I can't believe how awesome he is doing with her btw!) so my hour of "free" time is done.