Tone me down and break a board

I guess if there is one good thing about insomnia it at least has me writing this week. Well, writing at night on my blog, less so at work were I actually have deadlines and shit. Don't expect too much though. I don't have my glasses on so I can barely make out the letters I am typing. Add to that the pharmaceutical helper I just took and you never know what I'm going to say.

So anyone think I may have been a little over excited about Noah making a friend?

I know many of you understand why I'm excited, but I was a bit over the top the last couple days with my glee. More like I was the one that had a new BFF.

Think you know where this is going?

Yeah, NBF cancelled on Noah tonight for buddy board breaking at karate. His mom called and said he wasn't feeling well.

Yes, I know, he very well may not be feeling well. I shouldn't be reading something in to it. Except I can't quite help myself. My first thought was shit, what did Noah do to upset/scare/piss off NBF so he didn't want to come?

Or did I get too excited in front of the other mother and scare her away myself? One of my good friends did tell me the other day to be careful what I tell NBF's mom, to perhaps not be quite so open about our difficulties (wise woman that Julie).

Oh hell, who knows. Maybe he really was sick. Or maybe he got too nervous about karate and board breaking.

So let me tell you about board breaking! Awesomeness. Noah did it last year, but this is the first time I was able to break a board.

And I was fierce! 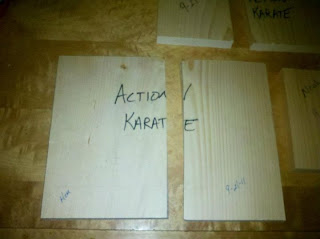 I broke that sucker with my bare hand!

Noah rocked it out as well. 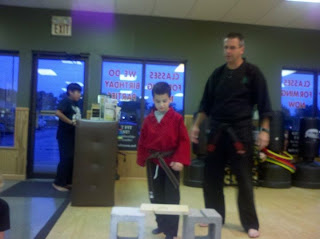 Here he is preparing to break the board with an axe kick (which I keep mishearing him say as an ass kick, and that makes me laugh). 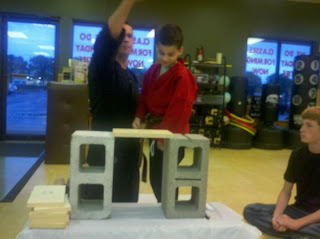 Here he is focusing on the board. 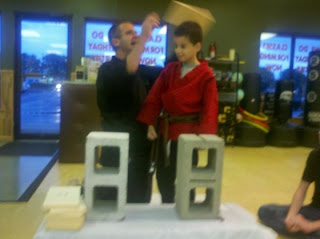 A little game of what is harder, my head or the board. 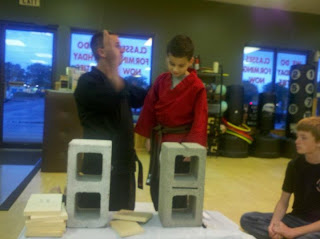 It was fun, and I'm glad Noah let me be his buddy so I got to break my own board.

I'm taking it to work and putting it up on my office wall to remind people not to mess with me. ;)

Of friends and tics and insomnia

Despite that, I wanted to post something good on here, since I know it has been a while.

First, Noah's tic has subsided dramatically, especially the head movements. He still has the throat clearing (verbal tic), especially when he is doing homework or at the computer. Sometimes a day or two goes by and I don't notice them at all.

I know they could (most likely will) come back. I know new ones could manifest. I think though, that we will be ok. The shock has passed; acceptance has moved in.

But the really good thing I wanted to share, is that Noah has a friend. A real friend. Yes, I know, versus a fake friend. ha ha

Maybe I should say he has a friendship that is returned. A best friend that considers Noah his best friend as well.

I met his mom at meet the teacher night and I heard her say "I need to meet the parents of this boy Noah that NBF (Noah's best friend) keeps talking about."  So I went up to her and said "I'm Noah's mom, and all he talks about is your son."

So...blah blah blah...we set up a play date with the boys for last Sunday.

Am I the only one that gets nervous about play dates because it is as much a date between the parents as it is between the kids? I felt like I was headed out on a first date. Granted, it was to Burger King and I was in jeans and no makeup...but still. There was that awkward first conversation, made only slightly easier because we could always fall back on the "so, what's your kids diagnosis" line of conversation.

Of course, I had to keep reminding myself not to say too much lest I scare her away completely.

Great news though, Noah and NBF had a great time. And NBF's mom and I clicked as well.

When you have kids like ours you worry beyond the typical is my kid hanging out with a good crowd worries. Since Noah is in an emotional support class he is with other kids that struggle with their behaviors and emotions. There are kids in there that I would not consider a good match for Noah, either because Noah would dominate them, or because Noah would be learning negative behaviors from them.

NBF is similar to Noah in energy and impulsiveness. He has a good heart and is kind. I could see the two of them supporting each other and it made my heart smile.

They ride the bus together and it makes me happy to see Noah get on the bus with a big smile as he sits next to NBF every morning.

NBF is coming with Noah tomorrow to karate for buddy board breaking. His mom will be there too. We are both excited to see our boys break boards.

This is the first time Noah has brought a buddy with him to any activity at karate.

Honestly, and yes I know it's probably over the top, but I am so happy about this! I feel like something big and wonderful just opened up for Noah. Something I was afraid was never going to happen.

I better die in the first wave

The thing is, I'm in a kind of grey space right now. Stress is high, coping is low. There isn't much joy** in life right now.

I actually realized this a few weeks ago, when I started thinking I would want to be taken in the first wave.

You know, the first wave of the alien attack* (or maybe the zombie attack?).

No sense making it through the first wave, or the second wave, and joining the resistance. Shit, I can barely cope with family life right now when I have power and modern conveniences and ready access to pharmaceuticals. Plus, I'm exhausted all the time. I can't imagine taking care of my family when we are hiding from aliens (or zombies), not to mention the total lack of wi-fi access.

I used to think that I'd be one of the strong ones in an emergency. I'm pretty self sufficient. I have the common sense. I can do things, especially if I'm told I can't. I may not be the most physically fit, but I could make do. Plus my extra insulation just meant I'd go longer if food was scarce. And fuck if I was going to let the aliens win. Or the zombies. Or the Republicans.

But lately, the grey is heavier. And I started thinking that if there is no joy, why would I really want to go to all that trouble? And why would I want to drag Noah through it, when it would be a world even more chaotic than he deals with now?

At least when I'm lying awake because I can't turn my thoughts off I have new topics to obsess over. Less boredom, more morbidity.

I probably should call that number my therapist gave me. I might need a bit of a pharmaceutical tweak.

*Thanks to the TNT summer series Falling Skies for this morbid train of thought. Loved the show though, even if I won't be fighting next to Noah Wyle!

**I wrote this last night. Sometimes before I go to bed I write my best stuff. Sometimes it's the craziest. You can decide what this post is. The fact that I wrote this at all is actually making me laugh right now. So maybe I do have a bit of joy in me, even if it is twisted at the moment. I mean really, aliens and zombies? Shit, it really is the Republicans we need to be scared of.

Unless they were taken over by the aliens...