The ladies live to sag another day!!

Such a relief. While I was working very hard at not being worried, underneath it all I was scared. Obviously.

Thank you for everyone's prayers and good wishes!

A long and rambling post about needles, boobs, titanium and puppies.


A cool little factoid about my husband is that he works at a cancer center and has been there forever 20+ years, so he knows just about everyone else that works there. It's really handy when you need your annual mammogram because not only do they offer it to spouses for free, but he just has to call over to one of the many women that work there that think he's the greatest to schedule it for me. Even better is that after they take cool pictures of my breasts, he takes me to lunch at my favorite Thai restaurant!

It's also awesome that he is able to get the results of that mammogram before they even send the results to my own doctor.

That also means that before he has to come home and tell me that there is something there that wasn't there the last time, he has already talked to one of his doctor buddies and has a promise to schedule me in asap for more scans and a biopsy if needed.

But, that also means that he is the one that has to come home and tell me that there is something there that wasn't there the last time. And that he's had several more hours to worry about it before he tells me.

So when he tells me "they found something," and I say "that's not funny, don't mess with me, Noah's been an ass this afternoon and I'm not in the mood," and he gives me the no, I'm serious look and then says "but it's small and there is a very good chance it is nothing at all" and I cry, he can make me cry harder because he says, "even if it is something we are a team and we will deal with it together."

(And then we, and by we I mean me, make really bad jokes about it for the next two days until I go in for the next level of mammogram, ultrasound and possible biopsy.)

By the next night I had him promising to get me pot if I needed chemo, even though he insists that if it is something it's so small I probably wouldn't need chemo.

And then he ignored me listened to me opine about losing my hair because my scalp is in all likelihood horribly disfigured and scarred under my gorgeous and perfectly groomed locks (and no, I couldn't type that with a straight face) because I'm a picker and I wouldn't look good bald even if it wasn't disfigured, because my face is too round and fat to not have hair.  To which he responded "can we just get through Friday before you jump five steps ahead."

No. I can't. Because I'm a planner and a picker obviously and I need to think through all the possibilities so I can get the most impact out of my horribly morbid and inappropriate jokes for the next week be a well informed patient.

So then the doctor said "well, let's do a needle biopsy," and I said, "yes, lets, it's already scheduled" and she looked at me and said "no, I don't think so" and I said "yes, my husband said it was" and she said "well..." and then "we'll fit you in. Go wait in the waiting room."

I sent Rich back to his office in another part of the building (down the hall, turn left, then right at the lobby - in case he forgets some day) and we had this conversation via text. 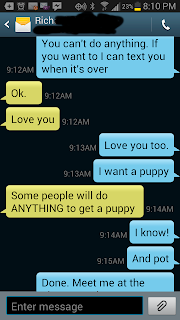 And then I told the technician and the doctor both that Rich had promised me a puppy. Because clearly that text implied that he was DEFINITELY getting me a puppy. Right?

Anyway...within five minutes they had me in a room setting up for the biopsy. They left me in the room by myself for a couple minutes so I started taking pictures. They totally caught me at it and laughed when I said I had to blog about the cool boob table.

(Remember when I was fascinated by this chair when I saw the doc before my frankenvulva surgery? Obviously I am oddly fascinated by BD/SM inspired medical equipment.) 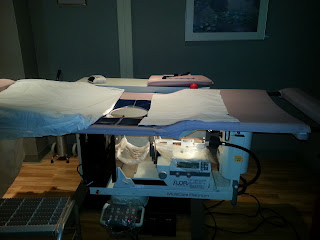 Before I got on the table I asked the doctor if I could talk to her during the procedure and she said no, which really cut down on my ability to make stupid jokes. Way to kill my anti-stress buzz doc. :(

So... about the table - you lay face down on the table and your boob goes in the round hole and hangs down into that plastic-ish sling looking thing. I assume that is why they call it the "boob hole table."* Then they take more scans, do something on the computer, stereo something-or-other to line the needle up, shoot you up with lidocaine to numb your tit a bit, and wam bam thank you mam you have this huge ass needle in your breast (totally did not see the needle but am assuming "huge ass" is an accurate description considering they were not only taking things out of me but also putting a titanium marker in me and they had to go in almost 3 inches to get to it).

After the needle was in the right place the doctor told me there was going to be a loud popping sound of air, like uncorking a bottle of champagne. And there was and because I couldn't TALK I could only think loudly in my head that "OMFG, she just totally popped my boob."

After that the needle did some rotating kind of thing and took part of the "irregular density" out to send to the lab. Then they shoved in a piece of titanium to act as a marker to make sure they were in the correct place. Then wam bam thank you mam the needle came out and they cleaned me up and put a totally not fancy bandage on it. Then I had another mammogram to make sure they yanked the tissue from the right place. I can't believe I forgot to take a picture of the scan of my titanium marked boob for all y'alls!

And that was it. I find out the results on Tuesday. I assume Rich will stalk the computer until they are available and then call me. Then I'll call the doctor and tell her what the results are.

In all seriousness though (for everyone that reads this blog post after searching for "what a breast biopsy is like," which I predict will be second only to "boob hole" in the ways people find this) the biopsy bit was not bad at all. The pain was minimal and I was probably only on the table about ten minutes, less than five of that involved the actual needle bit. Way less painful than a root canal! Actually, less painful than most of the dental work I've had period.


*I have no idea if that is what they call it.

Email ThisBlogThis!Share to TwitterShare to FacebookShare to Pinterest
Labels: boob hole, breast biopsy, frankenvulva, in which I tell you way too much about my life, mammogram, pictures, the ladies, TMI
Newer Posts Older Posts Home
Subscribe to: Posts (Atom)