What is the day before Thanksgiving? Why, It's PIE DAY!

Apple Pie cooling on the windowsill. (OK, not really, it's on the counter.)

Pumpkin Pie baking in the oven!

Every surface in the kitchen, including the floor and the front of my shirt, covered in flour. Where the hell did that house keeper disappear to?

Last year I gave you the recipes for my favorite pumpkin pie and pie crust.

This year it is for my favorite apple pie recipe, what I like to call the Best Damn Apple Pie. I repeated the pie crust recipe below because I love you. 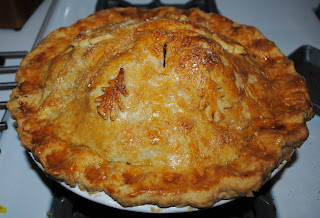 This year I tried brushing it with an egg wash and dusting it with sugar crystals. I need a better pastry brush, but I think it gave it a nice rustic appearance.


A good pie crust is all about technique.

1. Combine the flour and salt. Then grate the frozen butter into the flour with a cheese grater.

Freezing, then grating the butter, is the key. The little bits of frozen butter are what makes the crust so flaky. After grating in the butter work quickly, because you don't want the butter to get soft.

2. Add the ice water a tablespoonful at a time and mix in until the mixture forms a ball. Do not be tempted to add too much water! Do not over work the dough!

3. If you've worked fast enough and the butter is still frozen you can roll out the crust now. If not, refrigerate it for a couple hours. It will roll out much easier if you have planned ahead and can refrigerate it.

I've also found that when you need enough dough for a top and bottom crust, it is better to make the recipe twice, rather than double it.

Try not to overwork the dough when you roll it out. And keep it cold. I used to roll mine out on parchment paper but I found it always stuck because bits of the butter would soften. Then the parchment would tear. Then I would get frustrated and let fly with a few F bombs. This year I tried rolling it out on a silicone pastry sheet and dusted it liberally (along with my floors and counters) with flour so it didn't stick. It rolled out like a dream. I'll let you know if it changes the texture or taste of the finished product.

The true magic ingredient in my pie crust is my great-grandmother Ninin's rolling pin. And since I'm not giving that up, I can't exactly guarantee your crust will turn out as awesome as mine. If you follow my instructions I bet it will still turn out pretty damn good.

Posted by Kristine on Wednesday, November 23, 2011