Let's talk about my vagina, shall we?

I like to keep it real on MNT. And I figure if you can't talk about your cooter among friends...well...

I recently had an appointment with a urogynecologist about the misbehaving lady bits.

It was an interesting appointment.

The exam chair was Teh Awesome! 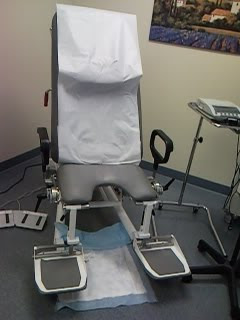 That puppy moved up, and it moved down. It tilted backwards and it tilted forwards. My imagination was working overtime when I was sitting on it. And then when The Doctor sat on his chair in front of me the possibilities were almost overwhelming! But I digress...

Before The Doctor saw me, the nurse made me pee in "The Pot.” 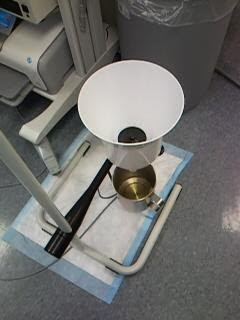 That is no coffee can folks. That is one super-fancy pot that measures how hard, fast or slow your tinkle is, and then graphs it all out for everyone to see. I was able to watch it in real time. I tried my best to draw a pretty tinkle graph, but quickly learned I'm going to need more practice in the art of Decorative Tinkle Graphing.

After I played in the chair and pissed in the pot The Doctor came in to do his thing. He did a lot of measuring of the lady parts, inside and out. Every orifice down there was well examined.

After I was poked and prodded and measured, I sat in the waiting area with a bunch of old women and their husbands. Those lucky old couples got quite an earful when The Doctor took me in to the consultation room, which is right off the waiting area. At least half of the conversation was about Teh Sex and how the falling bits and bulging things and the peeing are just not conducive to Teh Exciting Sex Life.  I figured if The Doctor is going to be down there manipulating things around he might as well do what he can to improve the old orgasm potential. I'd be crazy to not ask, right?

The Doctor drew some pictures for me. Its clear why he's a surgeon and not an artist. Despite his lack of artistic talent, I recognized the parts.

And I knew what he was going to tell me.

What I have suspected for months is now official.

~~~
Make yourself comfortable friends; I have a story to tell.

I was 42 weeks pregnant and finally the little monster angel decided to make his appearance.  But something was holding him back. So the kind doctor pulled out a medieval instrument of torture called The Forceps to help him along.

Let me explain:
To use The Forceps, they fillet the laboring mother open from her vagina to her asshole (they call this The Episiotomy). It's a bit like having a zipper put in; a rather bizarre flesh zipper, but a zipper no less. They "unzip" the area far enough to get the The Forceps in and then the baby's head out. Then they spend an hour or three zipping (stitching) it back up.

This leaves the mother in a very vulnerable state, yet no one really tells her before she has a baby just how painful it is after the baby is born. And for how long!

They also don't pound it into her head that she is not 20 years old and also, is not super woman.

Even if she is told, she doesn't remember that she shouldn't do anything but sleep, eat and take care of the baby.

Seriously new mothers, fuck the vacuuming.  Because if you don't, you'll end up like me with a zipper that unzipped itself half-way down while you were trying to take your first shit, and then refused to zip itself back up.

How's that for a visual?

First we have Prolapsed Uterus. She's a bit of an attention whore and is constantly trying to make appearances when and where she isn't wanted.

Prolapsed Uterus has a brother called Rectocele who occasionally visits My Vagina. Rectocele is a real pain in the ass.

Prolapsed Uterus and Rectocele have a cousin, Stress Incontinence, who resides in My Bladder. Stress Incontinence is very unreliable and often moody. In fact, he is downright pissy. It's believed that he suffers from a poor support system.

Now, My Bladder used to be a nice, reliable part of My Pelvis. It wasn't big, and it wasn't fancy, but it was the kind of place you could count on. Unfortunately, over time things started to slide downhill in My Bladder. (Personally, I think the Republicans moved in and put a stop to all the supporting connective tissue that was keeping it stable. One of those "can't see the forest for the trees kind of things." They felt it was too "big pelvis" and since they couldn't see how it directly benefited them...well, you know those Republicans.)

And that, my friends, is when Stress Incontinence moved in. And let me tell you, he is an intolerant fool. He especially has it in for Coughing, Sneezing, Jumping, Running, and anything even remotely related to Exercise. He's a vindictive son of a bitch and takes joy in pissing everyone off. Literally.
~~~
I go back soon for bladder function testing. Yeah, more chair time! And then we'll schedule a surgery date to attempt to evict The Frankenvulva family from My Pelvis.

Email ThisBlogThis!Share to TwitterShare to FacebookShare to Pinterest
Labels: frankenvulva, the posts that make my husband cringe