I sukey at sake

Instead of doing a regular workout in karate last Saturday someone asshole suggested we torture ourselves we play something they were calling sake.

Of course my first thought was Hell to the yes! I mean wow, this karate thing just keeps getting better and better. We're going to play drinking games man!

Hah. Joke was on me. Sake was really "sockey" a game they described as something between soccer and hockey. Three against three using kick blockers as rackets and balls. Sometimes more than one ball. The object of course was to hit the ball with the blockers and get it into the opposite teams goal.

Somehow I ended up on a team with two black belts, one who had to be at least 6'6" (no exaggeration).

Now, its no exaggeration when I tell you that I'm not exactly the most coordinated person on the planet. In fact, that's probably an understatement.

To an observer I probably looked a bit like a weeble with a white circle around its middle. Except not only do I wobble, but I also fall down. Hard.

I'd like to think people thought I was diving for the ball. Really, I was. A flying dive at the ball. It had nothing to do with tripping over my own well pedicured feet.

I went down hard. One of those times where it felt like I was falling slow motion and couldn't do anything to help myself. But, I got right back up and finished out the fucking game.

It wasn't until a few hours later that my knee started to swell and hurt. Six days later this is what it looks like. One big bruise from my ankle to my knee. The picture doesn't do it justice. 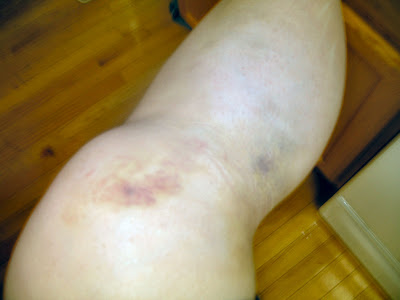 Oh yeah baby, I am fierce! And I most definitely suckey at sockey!

Email ThisBlogThis!Share to TwitterShare to FacebookShare to Pinterest
Labels: karate