One of the best parts of having married into a Jewish family is the food.

Mmmm....until you have tasted brisket, or true kosher chicken soup you haven't lived.

I've learned to cook a few things over the last ten years. I make a mean hamentaschen! I can throw together a delicious brisket. And my Jewish apple cake is to die for, seriously!

But one of my favorite things to make is latkes at Hanukkah. I don't really follow a recipe anymore, but I thought I'd show you how I make them.


This year I decided to use purple potatoes. 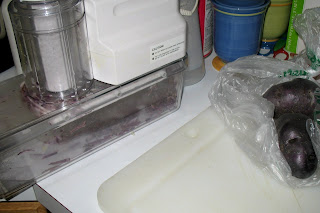 First grate the onion (I used one large sweet onion) and the potatoes (five medium to large sized purple potatoes plus one sweet potato). I have an electric mandoline which makes it easy. 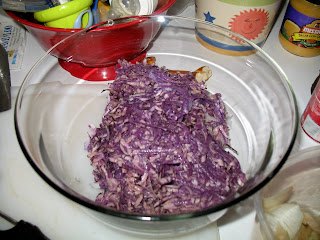 After you have the onions and potatoes grated you need to drain the liquid from them. I use a colander and press out what liquid I can with my hands. 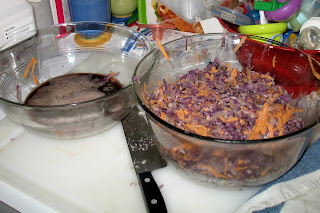 Then I get aggressive and using a clean dish towel I twist and squeeze out the rest of the liquid. 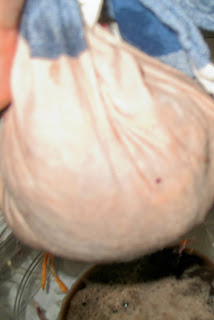 I put the liquid aside and let the potato starch settle out. 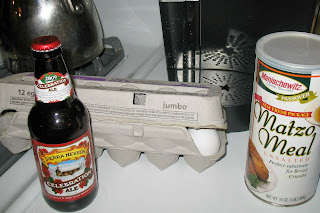 Then I add a couple eggs, some matzo meal or flour (this time I used both) and some beer.

I use the beer as a leavening agent instead of baking powder or baking soda to help hold things together. It adds a little extra flavor too. Just don't use too much if its a dark or strong beer or the latkes will end up bitter. 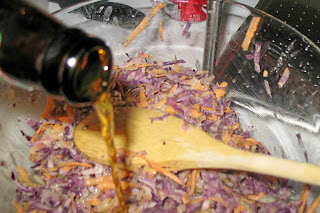 Let's not tell Rich this time I used one of his fancy ales because that was all we had. 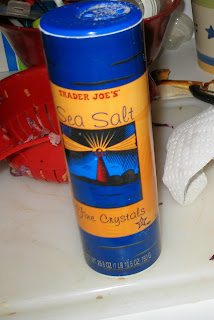 You add salt to taste. And yes, you really should taste it to make sure you have enough.

Let's pretend this is Kosher salt. It would make a better visual I'm sure. 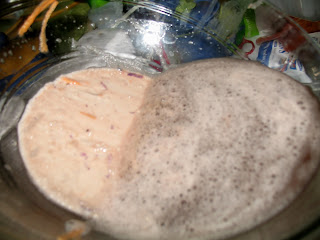 Now, remember the liquid from the potatoes that you set aside. Most of the potato starch should have settled out by now. Pour off the liquid and add the starch to the potato mixture. The starch helps everything stick together and firms it up. 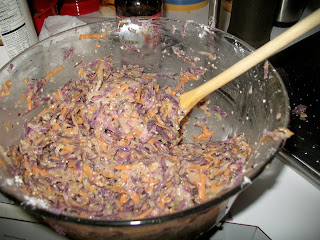 Now mix everything all together. 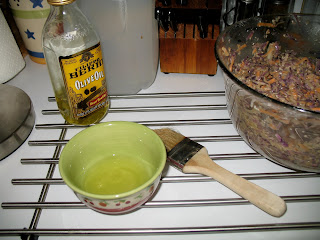 Heat up your griddle or frying pan. I use olive oil that I brush on with a pastry brush. I admit it tastes better if you use a lot of oil (doesn't everything?), but I control the amount by using the brush. 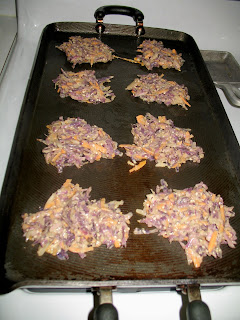 I scoop it out with an ice cream scoop then flatten it down. 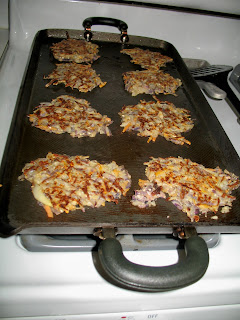 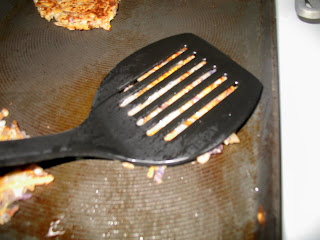 and flatten to get out any excess moisture.

Don't rush them or you will be serving raw potatoes. 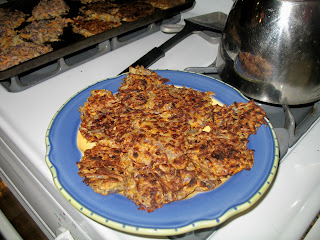 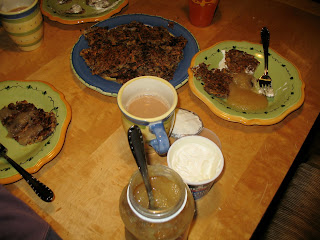 I serve them with sour cream and apple sauce.

I've been known to make my own apple sauce, but that didn't happen this year. Plus, Rich prefers the cheap version out of the jar (high fructose corn syrup anyone?) and Noah would probably freak out if I served apple sauce with chunks in it. Kiel doesn't touch the stuff either way. 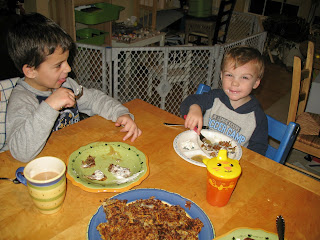 This year he ate the sour cream. That's it. Don't try and trick him with purple potatoes.

Everyone else enjoyed them though!