Recently MomSelect offered me the opportunity to try out the new Zhu Zhu pets!   In fact, the company sent me pretty much the entire habitat plus two of the hamsters, the car and an exercise ball! Seriously, this is the biggest review I have ever been part of! 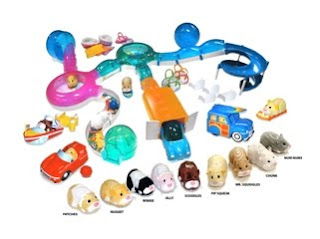 Zhu Zhu Pets are fun, interactive hamsters that talk, move and even navigate their way around their own habitats. And the best thing about these pets?  No mess and no fuss…just hours of interactive play!


I waited until an afternoon that Noah and I were home without Kiel, since the recommended age range is 4 to 8 years. Noah was SO excited to try these out. 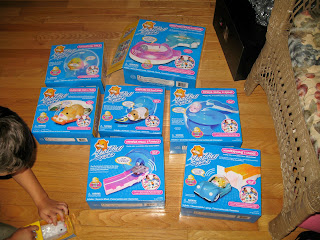 Here is everything they sent us except the two hamsters.  Wow huh? 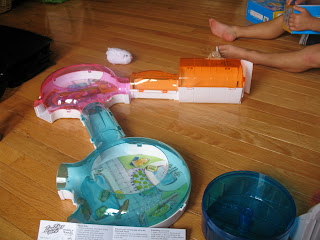 Here we have started to put the habitat together. I'm pretty good at putting stuff together, and I'm going to admit this was a bit tricky until I got used to how the connections fit together. And to be completely honest, I think the quality of the connections could be improved. They weren't always easy to get together and sometimes didn't create a smooth path for the hamster to travel. 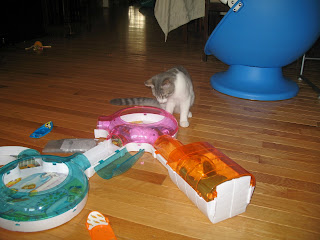 Even the kitten is getting in on the action! Actually he was pretty fascinated by the hamsters and definitely did not know what to make of them. Watching him check them out was as much fun as watching the boys play! 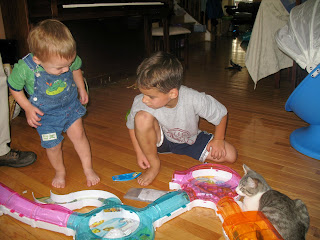 We took a basketball break in the middle of putting this together. It was a time consuming process. By the time we got back to it Kiel was home and demanded to be part of the action. 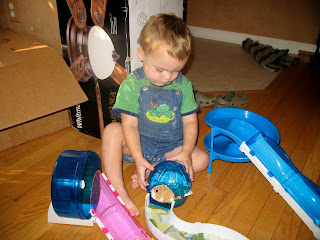 Kiel was as fascinated by it all as the kitten was. Of course his ability to grasp the concept of how to use it was about the level of the kitten. It didn't stop him from having fun with it though! 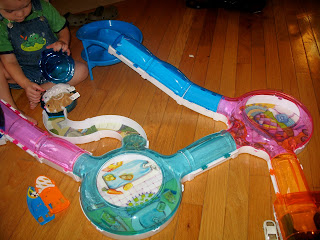 A lot of the fun included lifting up the lids of the habitat (most of the pieces are hinged so you can access the habitat if the hamsters get stuck, which happened fairly often to us).  Not shown here is the Go Go Adventure (exercise) Ball, which Kiel assumed should be thrown as all balls should be thrown.  After throwing and having it separate into its two pieces, he put one half on his head. I really need to get a picture of that, because, Hello! Cuteness! 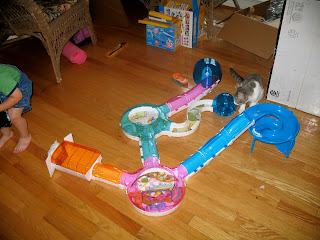 Here we have the habitat put together. Noah dictated where he wanted everything to go. There are a lot of options on how to put it together, and you can take it apart and rearrange.  I recommend adults do this part though, because as I said before, it isn't always easy getting the connections together correctly.

Now, I have boys, and I'm assuming that my boys are fairly typical in their creative play ideas, which included using their Matchbox cars in the trails. Hint: they don't work well in there and they get in the way of the hamsters. Still, it didn't stop me from finding several cars parked in the garage the next morning. 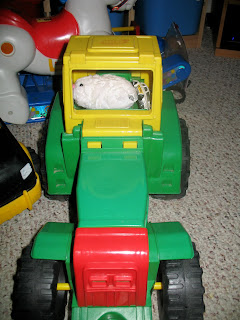 Later in the evening I found Kiel riding on the back of this tractor with one of the Zhu Zhu hamsters and a few Matchbox cars going for a ride with him.

So, what did we think of the Zhu Zhu pets?  Well, my boys certainly had fun with them, and they've been playing with them every day since, although less each day as the habitrail has gradually come apart. Again, boys! And I found Kiel riding his turtle into it, and Noah pushing Kiel's large trucks into it. I think they may have been involved in one of Noah's little "fits of anger" which means they probably were at the receiving end of a few kicks. Gotta be completely honest...
The hamsters are definitely cute! And fun to watch them move around. They move around erratically, which made it even more fun to watch Kiel and the kitten try to figure out.
Unfortunately, as I pointed out before, I had problems with the quality of the connections between the different parts of the habitrail. And I never did figure out how to keep the garage doors on it.

This must be used on a flat surface, not carpet. Even our wood floors with the very slight irregularities between the boards created some problems for them.  I never had luck with getting the exercise ball to work properly, even though included with it is a piece to hook on to the hamster to help stabilize it inside the ball.  The hamsters frequently got stuck in the trails, either because they jammed themselves in somewhere or they flipped on their side. None of this seemed to bother my boys though.

Kiel is definitely too young for them. The age range does specify 4 years as the minimum age, so this is no surprise. And Noah? Well, as excited as he was about it, and as much fun as he had, he's just not the kind of kid that this is suited for. He's too rough with his toys and doesn't have the patience to make sure everything is set up correctly.

If I can make a bit of a generality here, I think this toy is probably best suited for girls, probably in the 6+ age range.  Not that there aren't boys who would enjoy this as well, they just need to be able to play more calmly than mine do.

I'll give the boys a few more days to enjoy this, but hopefully not enough time to break anything, then I'm going to pack it all up.  I'm going to look for a family that will enjoy this and wouldn't be able to buy it on their own. At work we always sponsor either a family or a woman's shelter during the holidays, so that might be an idea. 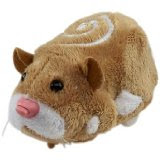 Now, on to the good stuff!!  I am able to offer one of my readers a hamster and slide & ramp! 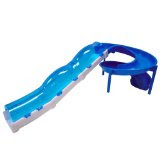 All you have to do is leave a comment here!
If you'd like to earn extra entries you can Tweet about this contest and link to this post - you can tweet once a day, just come back and leave me a comment each time.
I will use random.org to chose the winner. You have until midnight on September 15, 2009 to enter. Don't forget to leave your email address IN the comment.
And if you happen to know me in real life, you can enter too! Don't be afraid to comment here!

Posted by Kristine on Saturday, September 05, 2009

Email ThisBlogThis!Share to TwitterShare to FacebookShare to Pinterest
Labels: contest