Pulling back and reconnecting

I wrote this post several weeks ago. I needed it to sit for a while to make sure I was ready to post it. I think it's ready now.

Parenting is hard. It just is, and there is no way to really prepare for it. You jump in and hope you swim. Fortunately, Rich and I have managed to keep our heads above water, despite some very deep water and long periods of doggy paddling. Occasionally we have needed some help and managed to grab on to some floaty devices at just the right time.

I've learned from every wave we have managed to navigate ourselves through. I've learned to float when I can, but always have lungs full of air just in case.

And I think maybe I got a little over confident.

Amidst juggling Noah's medical needs, his academic needs, and his physical needs, I think I forgot about his emotional needs.


We had a pretty good summer, and his transition into fourth grade and a new school overall went smoothly (on the Noah scale of smoothness anyway). Soccer was great in the fall and although it took lots of encouragement he's loving playing basketball this winter. We've seen improvement with his reading, and he's keeping up in math. He even received an A in science last marking period and a B in social studies.

He has an amazing emotional support teacher and overall the school is very supportive of him. There were bumps to be sure, but overall we have been so proud of him.

While I am always thinking about what is coming up next and what more we should be doing for him, I let us float the last few months. We received the results of his neuropsych testing from the FASD clinic the end of October. It included several recommendations, medical and academic, that I was very slowly chipping away at, but not with any urgency. Mostly I was enjoying not feeling like we were always being chased by the shark.

Looking back, I think things started to change in November. Perhaps it was Kiel's birthday. Or the month of disrupted school attendance due to super storm Sandy and then school holidays around Thanksgiving. Or maybe it wasn't any of that.

What I do know is that Noah started to struggle a little more, both at school and at home. He created more chaos at home, got into more things around the house we thought he knew he shouldn't. He was plugging up the toilet again, the encopresis was back and I felt like poop was everywhere. He was taking longer to do homework and was almost impossible to keep focused.

He started picking his nose again and washing his hands obsessively. And new motor tics started in his arms and neck.

It was getting to the point where I didn't trust him out of my site. Too many times he created chaos in minutes. Some of it dangerous. I questioned if I could keep him safe.

He was mouthier and brattier and ruder than ever. And so incredibly oppositional.

Words were said that should never been spoken.

And then we have Kiel. He turned five. He's sleeping in his own room (finally). I'm able to spend more time alone with him and LOVE our Mommy-Kiel days. He's a sweet, funny kid that loves to cuddle. He tells me a hundred times a day (if not more) that he loves me and that I'm his best mom ever. He's the best of everything a five year old little boy can be.

I love both my boys intensely, fiercely, with a depth I never imagined was possible. But the truth is that I like Kiel far more than I like Noah the last couple months.

He was in trouble all the time. And while I was saying we can't let this continue, I was handling it more like a a strict no-nonsense parent, than the therapeutic parent he needed. The parent that understood why he struggled.

He had several rough days at school this week, and on Wednesday he hit a new low. On Tuesday he was in trouble for rhyming "stick" and "dick" (except he didn't know what "dick" meant so didn't understand why he was in trouble) and because he ate like a dog at lunch (except it was like a pig and he can't believe they didn't know that). Wednesday at recess he jumped the property line fence (because they were playing chase and he was running away from the kid that was "it."), he was removed from art class, and screamed at his aid, his general ed teacher, and his ES teacher; all before 1pm.

When he walked in the door that afternoon his first words were "I had the worst day ever."

Those words changed something in me.

Instead of consequences, I gave him a big hug and told him I loved him and it was OK.

We sat on the couch together and I held him.  I asked him if he knew how much I loved him.

Those words broke my heart. How had I let it come to this? How did I let him get to the point that he questioned my love for him?

You can't fix everything with love, but you are going to find it much harder to fix anything without it.

We talked and cuddled. We reconnected physically. I'm not sure the last time I sat with him like that was.

Before bed we sat on the couch together again. The hour between dinner and bed had been rocky. I could see a physical difference in him. He was more settled when we were together on the couch. Now he looked angry, and sad.

We sat together, although he wouldn't cuddle then, and I asked him why he was so sad. I wouldn't let it go. He covered himself, including his face, with a blanket. He didn't want to talk. He said he didn't know how to say it. He didn't know the words. I pushed a little more.

Finally he said "it's you and Dad." He didn't say much more than that, but I didn't need to hear more. The pieces were coming together.

I know I had pulled back from him. I know things were said that made him question the stability of his life here. I know he felt misunderstood.

While I could tell other people that he had brain damage and it affected his impulse control and ability to connect actions with consequences, I wasn't using that knowledge as I parented him.

We talked. I made it very clear how much we love him. I apologized for my poor behavior. We talked about how we could both make it better. I reminded him that my job as his mother was to keep him safe, to raise him to be a good adult, to teach him how to be a good person, a good husband, a good father in the future. We talked about how the older I get the more I learn, and that when you are only almost ten you know a lot less than your parents, and that is why sometimes you just have to accept that mom and dad are in charge and even if you don't always like it you have to do what you are told. I'm sure I said far more than he could absorb. It seemed to work though.

Rich put him to bed with a quick whisper from me that he needed to reconnect and I would explain later.

I shared with Rich and made it very clear that we both needed to rethink how we were parenting because what we were doing was breaking Noah.

Noah went to school Thursday morning with a smile on his face. He told me he was going to have a great day. I emailed his teacher to tell him what I thought was going on, especially that I thought he was feeling misunderstood.

His teacher sent me this picture in the morning and said "This is the Noah I know!" 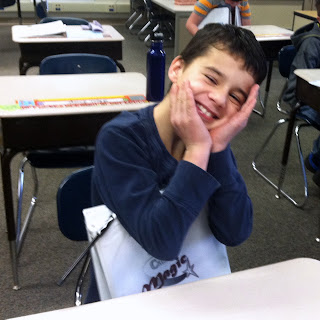 He had a perfect behavior day on Thursday. He also participated in his first after-school basketball program and did great. He was SO EXCITED when he came out of the gym to tell me he received a 100 points (perfect day). He was a different kid than the one we had been living with the last two months.

Sometimes I forget just how easy it is to screw up as a parent. Sometimes I lose sight of why this gig is so important. Sometimes I need reminders, like the sweet, silly face of this boy.