**I just found this post...guess I forgot to hit publish** 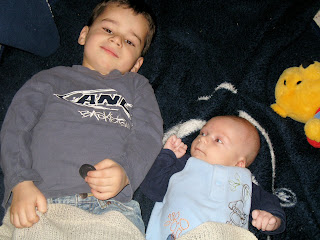 I'm finally getting a few minutes here and there during the day where Baby Brother is happy to sit in his swing. Occasionally he falls asleep and then I can get up to an hour or more. Don't get me wrong, I love holding BB! I remind myself constantly that he won't be this little forever. I love how he curls his body in to me when I hold him, with his little butt hunched up. I love sniffing his head and kissing it. 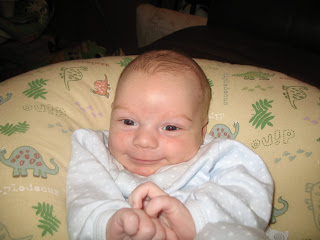 But sometimes, I just want both hands to myself. I want to be able to type freely, get a little work done in a reasonable amount of time, or clean the house (it really needs it!). Thankfully, as I said, I'm getting bits and pieces of time now.

I started back to work this week, somewhat unofficially. I'm going in for occasional meetings and taking on some smaller projects that I can do from home. BB is going in with me when I do need to be there. So far it's going well, although it has only been two days.

I'm very conflicted about being back to work. I love my job, so it feels good to be back doing it. However, I love, love, love being home with BB. I dread when I will have to send him to daycare.

Maternity leave has not exactly been what I imagined. Of course the PPD in the beginning did not help. I know getting back to work is the best thing for my mental health right now, but at the same time, there are things around the house that I thought I would get done while I was on leave. I had envisioned that I would have large chunks of time where BB would be sleeping (in his crib, without me holding him) for me to get things done. This house hasn't been truly clean in at least a year. I was so tired during my pregnancy that I did the bare minimum...if that. I also have sewing that I want to do for BB's room, as well as some outfits I would like to make him. And, I expected I would be writing here almost every day. Oh well...the best laid plans and all that.

BB is eight weeks old now. He's getting very good at holding up his head. He smiles all the time, especially when he sees The Boy. He has just started to look at some of his mobiles, and loves looking at the ones that have mirrors above him. This morning he was trying to reach up and grab things. Still no control of those hands though.

He sleeps with us at night and I love it. He goes anywhere from 3 to 6 hours before waking up to be fed. All I have to do is roll over and get him from his little "nest" and feed him. He falls back asleep with my nipple in his mouth. I'm usually able to get him back in to his nest to sleep for a few more hours. Early in the morning I feed him again and then he sleeps cuddled up next to me for a few more hours. He likes sleeping in as much as I do! I may be one of the few mom's who isn't walking around sleep deprived.

Nursing is going well, especially since I started boosting my milk supply. I pump now at least twice a day and have been routinely getting at least 3 ounces every day to freeze. A week ago I started to really increase the water I was drinking, and I drink Mothers Milk Tea two to three times a day. That seems to be making a difference as well. It is quite amazing how sensitive my body is when I don't drink enough. One day last week I forgot to push the water, and the next day there just wasn't enough for him. I won't make that mistake again. My breasts have started to really tingle at times. I'm guessing this is let down? Either way, it is an interesting feeling.

It is such a great feeling for me, to know I can give this amazing little boy every thing he needs; all the nourishment and love his can take. All the things I couldn't give TB, or he wouldn't take from me. It doesn't take away the sadness I will always have that I could never do that for TB. It does make me incredibly grateful that I was able to experience all this though. I will never take it for granted.
Posted by Kristine on Tuesday, January 15, 2008

Email ThisBlogThis!Share to TwitterShare to FacebookShare to Pinterest
Labels: breastfeeding, PPD, the boy