OK, I have a good reason for not being around for a bit. Really, I do.

And it involves poop. And puke. And more poop. Two weeks worth.

I have ALL the fun!

After a week of vomit and diarrhea Kiel ended up in the ER due to dehydration. They admitted him for the night because his electrolytes were all wacked out. He got IV fluids with some added potassium and perked up within a few hours.

It was a LONG night and not very comfortable for mommy. There were a few cute spots though, like when we first put him in the crib in the room. It was a big metal thing with metal bars and raised up so the mattress is high enough that doctors and nurses can work on a baby that is in it. Hospital cribs always remind me of elevated circus cages, kind of like this: 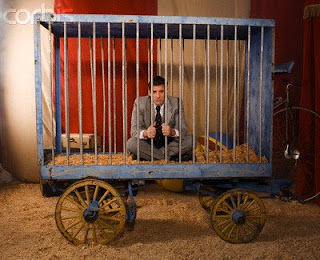 But without the man in the suit in it.

So anyway, when we first put Kiel inside it he busted up laughing. He just thought it was the funniest thing! He was all "Me? in a crib? Bwah hah haha!"

And then later, when he was feeling a little better he wanted to be out walking in the halls. So there he is in his monkey pj's, with an IV in his arm attached to an IV pump on wheels, with me chasing after him pushing the IV around. He was just too freaking cute.

I'm so thankful though we were only in the hospital for one night and it was for something relatively minor that was so easily treated. Believe me, several times I thought of all the other parents in similar situations but with far sicker children with much scarier problems. We were very lucky!

Kiel is feeling much better now. He's just like his old self except he still has diarrhea. Thirteen days of diarrhea now. Which means thirteen days he has not been able to go to daycare. Thirteen days that Rich or I have had to stay home. And its not over yet, because the diarrhea continues.

I took him back to the pediatrician today and they said it could be a few more days. Last week they were fairly sure it was the Norwalk virus, today they were saying it might be the rotovirus. I guess it doesn't matter either way as there really isn't a treatment for either other than keeping hydrated. Both are contagious and the virus sheds through the diarrhea. They sent me home with a stool sample kit. So there I was this afternoon scooping poop out of his diaper in to specimen containers to take to the lab. Really, I DO have all the fun!

I have to say work has been great about me missing so much time. I've been in a couple times and twice I took Kiel in with me for the morning last week when he was feeling better. And I've done some work from home, so I will only have to use a couple days of personal time for this.

Hopefully we are on the mend!